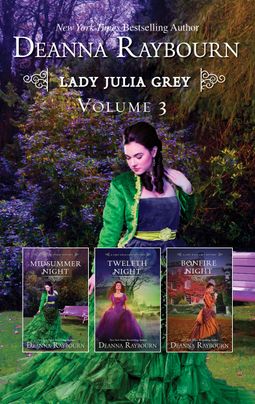 Midsummer in England—an auspicious time for a wedding. Brisbane has taken charge of the music. Julia has, perhaps mistakenly, authorized her sisters to choose the dress. And Belmont Abbey is overflowing with guests awaiting the blessed day. What could go wrong?

Combine the close-knit chaos of village life, pagan traditions bursting through staid Victorian conventions, and the congenial madness that tends to swirl around Lady Julia’s family and you get an unforgettable wedding. But add in a dangerous past nemesis who has come to wish them not-so-well, and their day to remember just might take a fatal turn…

To mark the passing of another decade, the esteemed—and eccentric—March family have assembled at Bellmont Abbey to perform the Twelfth Night Revels for their sleepy English village. But before Lady Julia and her handsome, sleuthing husband, Nicolas Brisbane, can take to the stage, a ruckus in the stable yard demands their attention. An abandoned infant is found nestled in the steel helm of St. George. What’s more, their only lead is the local legend of a haunted cottage and its ghastly inhabitant—who seems to have returned.

Once again, Lady Julia and Nicholas take up the challenge to investigate, and when the source of the mystery is revealed, they’ll be faced with an impossible choice—one that will alter the course of their lives…forever.

It’s the autumn of 1890, and almost a year has passed since—much to their surprise—Lady Julia and Nicholas became parents. Just as the couple begins to adapt, a solicitor arrives with a strange bequest. Nicholas, it seems, has inherited a country house—but only if he and his family are in residence from All Hallows’ Eve through Bonfire Night.

Neither Lady Julia nor Nicholas is likely to be put off by local legends of ghosts and witches, and the eerie noises and strange lights that flit from room to room simply intrigue them. Until a new lady’s maid disappears, igniting a caper that will have explosive results…