Today I’m delighted to play host to M. K. Tod whose new release, UNRAVELLED, is available NOW! She has graciously written a piece to share with us on the subject of becoming a historical fiction writer. Read on and discover how being an expat in Hong Kong inspired her to write…and when you’re finished, learn how to enter to win a copy of UNRAVELLED!

Summer 2004 – the summer that changed my life. In July of that year, my husband’s company asked him to consider a three-year assignment to Hong Kong. We hesitated only long enough to consult with our children and mothers, then plunged into planning and moving, riding the waves of fantasy and euphoria for the next few months. Everything seemed full of possibilities.

Winter 2005 – the bite of reality set in as I struggled to find occupation and purpose and to satisfy intellectual, emotional and social needs. My husband was frantically busy, travelling every week to locations throughout Asia. I had found only a few friends and no job. For a woman accustomed to juggling career, family and social activities, endless free time felt like a burden rather than a luxury. Excitement was replaced by loneliness and intense dislocation. How would I survive?

I dithered. I continued searching for a job. I complained to those back home. I prowled the streets of Hong Kong extending simple outings to multi-hour, blister-inducing walks. I joined an association of expat wives who met for coffee every Thursday. I read books and bought stacks of DVDs. I shopped. I visited Cambodia, Taiwan, and Australia. Gradually, an idea emerged.

My grandmother died on the way to her second wedding. I had often thought this dramatic curtain on life would make a good story and one day, sitting in our apartment with a wonderful view of harbor and city, I decided to write about her life. I had some notes my mother had written about her family. I had my computer and oceans of time.

The first step was research. To create a story based on the lives of my grandparents, I would have to understand WWI, the Depression and WWII. Not being a student of history, I felt the need to begin at the beginning. What caused WWI? Who were the players? What did soldiers experience? What happened on the home front?

Happily, the Internet offered reams and reams of information on military and political events as well as maps and photos and stories of individual experiences of war. I found soldiers’ diaries lovingly transcribed by relatives to preserve and honor long ago sacrifice. I found regiments maintaining information about those who served in WWI, the weapons used and uniforms worn, the rations eaten and songs sung. A world of chaos and bungling and death emerged and I became utterly captivated.

But a novel requires drama: a plot with twists and turns, characters going through change, tension and conflict. Clearly, I would have to embellish. I was a mathematics and science grad with no writing experience except business articles and client reports. “Writing a novel can’t be that hard,” I muttered to myself.

I bought a book on writing, underlining advice that seemed most useful. “Always have a notebook and pen on hand.” “Borrow (and steal) from your favorite writers.” “Master metaphor.” “Accelerate the pace with invisible writing.” “Sentences are written like jokes. The punch line is at the end.” “Mix description, narration, exposition and dialogue.” “Resolve all conflicts by the end of the story.” Gradually these bits of advice made sense.

Back in Toronto that summer, my mother provided further ingredients for the story by telling me that my grandfather fought at Vimy Ridge in April of 1917 and went on to be part of the Army of Occupation in Germany after WWI ended. She spoke of my great-grandparents and what she knew of her parents’ wedding, a few memories of the Depression and more substantial memories of living through WWII. She gave me a box of old photos and newspaper clippings and my grandfather’s scrapbooks. She also relayed the story of my grandfather’s involvement with Camp X, a place not far from Toronto where espionage agents were trained in WWII. My grandfather and espionage – who would have imagined?

The plot started to take shape.

Writing gave me more than an occupation; it gave me the thrill of doing something new. Unwittingly, I had accepted the need to let go of my old world and reinvent myself, had taken charge rather than allowing myself to continue wallowing. I had emerged from the culture shock of moving to a foreign country with a sense of purpose. Contentment settled in. Time passed. The story and my writing skills evolved.

In June 2007, we returned to Toronto. Before leaving, I took several last walks to favorite haunts—The Peak, the walk along Bowen Road, Dragon’s Back, a lively Vietnamese restaurant in Soho, the streets of Central, Stanley Market, the Man Mo temple, Teresa Coleman’s gallery—these familiar places were friends, touchstones in that bustling Asian city.

My novel was in its fourth version by then, the outcome of almost two years of work contained in a small moving box of printed materials, books on writing, novels and non-fiction books about WWI and WWII along with a collection of computer files.  I set those aside to resume my business career, occasionally working on the story on evenings and weekends. But the pull of writing would not let me go. I longed to craft sentences, build images of long ago times, and explore the emotions of a man and woman coping with war and the consequences of death and destruction. Hong Kong had turned me into a writer.

After completing a lengthy consulting project, I took the plunge and walked away from thirty years of accomplishments. I remember feeling inordinately pleased the first time I used the word ‘writer’ to describe my occupation. Finally, in late 2010, I threw away my consulting files. Had Toronto regulations permitted, I might have had a ceremonial bonfire to mark the end of that life. A wonderful life, really. One in which I had been fortunate enough to work with talented people in frequently demanding circumstances.

And where am I now? I’ve completed two novels and have an agent for one of them. A third novel is ready for editing and plot tuning. I have a blog called A Writer of History. I’ve conducted a reader survey. I’ve taken two writing courses and collected additional books on writing. I’m active in the community of writers, particularly those who write historical fiction and have even been asked to speak on the topic.

“What about my grandmother’s story?” you ask. It is being self-published this September under the title Unravelled. A fitting title for what happens in the novel and a fitting description of what happened when a woman from Toronto became an expat spouse in Hong Kong.

M.K. Tod writes historical fiction and blogs about all aspects of the genre at A Writer of History. Her debut novel, UNRAVELLED: Two wars. Two affairs. One marriage. is available in paperback and e-book formats from Amazon (US, Canada and elsewhere), Nook, Kobo, Google Play and soon on iTunes. Mary can be contacted on Facebook, Twitter and Goodreads.

Now, dying to know about UNRAVELLED? Here’s a sneak peek:

In October 1935, Edward Jamieson’s memories of war and a passionate love affair resurface when an invitation to a WWI memorial ceremony arrives. Though reluctant to visit the scenes of horror he has spent years trying to forget, Edward succumbs to the unlikely possibility of discovering what happened to Helene Noisette, the woman he once pledged to marry. Travelling through the French countryside with his wife Ann, Edward sees nothing but reminders of war. After a chance encounter with Helene at the dedication ceremony, Edward’s past puts his present life in jeopardy.

When WWII erupts a few years later, Edward is quickly caught up in the world of training espionage agents, while Ann counsels grieving women and copes with the daily threats facing those she loves. And once again, secrets and war threaten the bonds of marriage.

With events unfolding in France, England and Canada, UNRAVELLED is a compelling novel of love, duty and sacrifice set amongst the turmoil of two world wars.

M. K. is generously giving away two copies of UNRAVELLED–one print and one digital. The print copy is available for residents of the continental US only, but the digital is open to all North American residents. To enter, please leave a comment on the blog TODAY ONLY and be sure to include your state/province in the comment so I know if you’re eligible for the digital giveaway or both. Also, comments are on moderation and will not appear until I approve them. There may be a slight delay in approving as I am traveling this weekend, but you will be entered. Please enter only once and good luck! 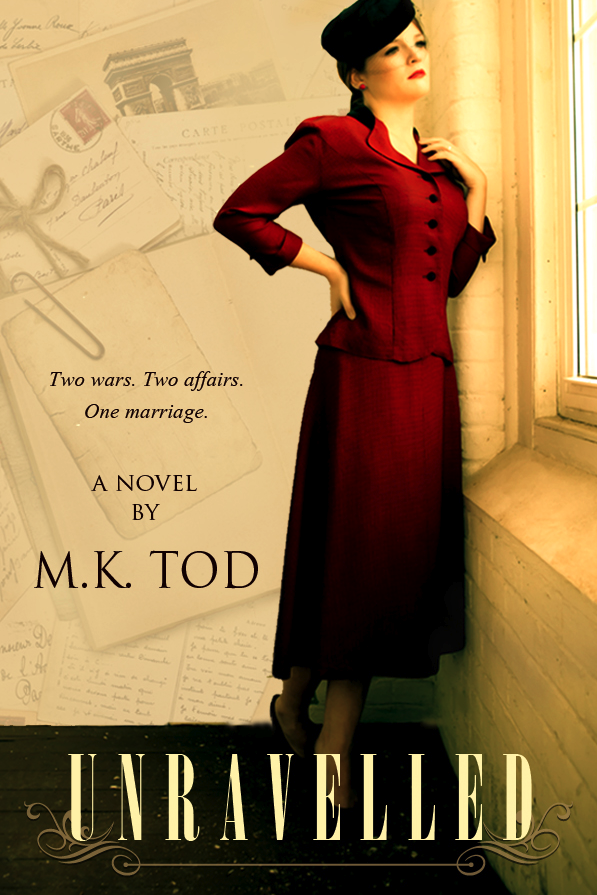 29 thoughts on “In which we have a special guest post”