In which it’s the book’s turn

Since we’re talking backstory this week–FINALLY. I’ve been sitting on these posts for about 18 months!–I thought I’d post the backstory of the book itself: the research. Now, this doesn’t represent all of the research. There were books I got from the library–both regular collections and interlibrary loans. There were documentaries and films I watched, and two full 4″ binders of articles I clipped and downloaded. I particularly enjoyed the Vanity Fair pieces on the second and third generation white Kenyans who have become notorious as their Happy Valley ancestors–sometimes for behavior every bit as reckless.

And speaking of the Happy Valley set, they were–along with landscape itself–the greatest inspiration for SPEAR. They were a unique collection of characters, well-born, hedonistic, and notorious for bad behavior. They were well-heeled and entitled and often actually titled. They were accustomed to money and privilege, moving smoothly from ancestral castles to the latest clubs in London, Paris, and New York. They took lovers and drugs with equal abandon, and most made bad ends. Shootings and overdoses and suicides and cirrhosis all took their toll, and their heyday largely ended in 1941 with the unsolved murder of Josslyn Hay, Earl of Erroll. (My money has always been on Jock Delves Broughton.) Julian Fellowes did a series sometime back of interesting crimes, and he featured the Erroll case–well worth tracking down–and WHITE MISCHIEF is considered the definitive book on the subject if you’re interested. The most intriguing version of the case came courtesy of a book I don’t have in my collection, the memoir of Juanita Carberry, the teenaged daughter of Baron Carbery–the change in spelling came when the baron left off his title. Juanita’s book is out of print, but she was uniquely positioned to comment on the Happy Valley set and its excesses.

And speaking of excesses, one of the most notorious of the Happy Valley group was Kiki Preston, “the girl with the silver syringe”, an heiress with a penchant for drugs. According to gossip at the time, she introduced Prince George–Duke of Kent and fourth son of King George V–to drugs and bore him an illegitimate child during his time in Africa. (Two of George V’s other sons, the future Edward VIII and George VI–father of the present queen–both traveled in Africa before their accessions. George traveled with his wife, but Edward was there as a bachelor prince with his younger brother, the Duke of Kent. His dalliances with married women and his dabbling in cocaine appalled his aides and keeping the stories quiet caused them considerable trouble.) Her drugs of choice were morphine, cocaine, and heroin, and she was famous for ordering them to be delivered via airplane. She was so open with her drug use that Cockie Blixen–second wife of Baron Bror Blixen, the husband of writer Karen–once remarked that Kiki “is very clever with her needle”, a line I gave Helen Farraday to say with regard to Bianca Pemberton. Kiki’s life is tragic but fascinating and a full biography of her is far overdue.

Posted below are the 55 books in my own collection that were useful in writing SPEAR. These make up the bulk of the material I used but certainly not all of it. Several of them–most in fact–are out of print now, but you could track them down via the library or secondhand sellers if you’re interested in reading further. 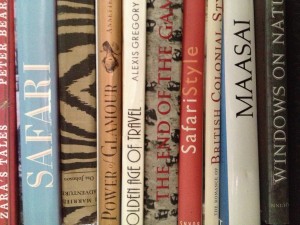 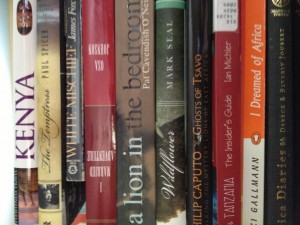 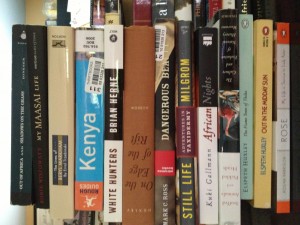 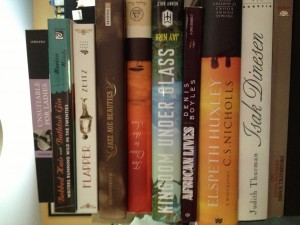 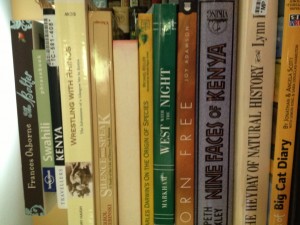 5 thoughts on “In which it’s the book’s turn”