In the kitchen with Carin

For the month of December, I’m delighted to turn the online journal over to guest writers. Today’s contributor is Carin! To follow her on the social media sites she included, you’ll need to–oh, you know. Cut. And paste.

First: hi, hello, hi! It’s an honor and a privilege to be guest blogging on D’s website. I’m Carin (aka @thummprints for the Twitter / Instagram crowd) and I’m here to talk to you about biscotti. Not just any biscotti, but literary biscotti. No, really. It’s a thing.

I’ve never spent a lot of time thinking about the process I go through to develop biscotti … but I did, just for you campers, and here’s what I know: sometimes things come to me fully formed, sometimes I bounce things off of people, and sometimes I give it my best and things just don’t come together like I thought they would. Essentially: this is the cookery version of what it’s like to write.

Hang on a minute … I’m having a revelation about my time spent in the kitchen.

Anywho, I actually did a fair amount of research before (other than rereading “A Spear of Summer Grass” … and if you haven’t read it, you NEED to get on that) I started flavor building, because I knew next to nothing about African sweets and baking. Did you know, except for a few notable exceptions, the peoples of East Africa are not big on dessert? HOWEVER they do have something called Jugu Cake, which, to my utter delight, is basically peanut biscotti! RYDERSCOTTI IS REGIONALLY RELAVANT. *fist-bump*

Ryder White is Africa: dramatic, beautiful, demanding, stubborn, and wonderful. I knew from the beginning I wanted to play with cardamom, because it is the spice equivalent of Ryder; it is Africa in my mind. I played up the hints of lemon and ginger to add brightness and depth, and added the pistachios as a subtle nod to the British Empire. It’s rare that I don’t make biscotti without some kind of chocolate (because omg, chocolate) – but I knew this biscotti needed to not be too sweet or too rich, it needed to be straightforward with just enough je ne sais quoi to keep you coming back (and who does that remind you of?).

If you’re interested in my other adaptation of Deanna’s characters into baked goods you can find Stokerscotti here. Fair warning, though, this recipe is a bit more labor intensive unless you have a ready supply of honeycomb. *eyes Deanna’s pantry*

Using the paddle attachment, cream butter and sugar together until light and fluffy. Add eggs one at a time, mixing until fully incorporated. Add vanilla and lemon extract, mix to incorporate.

In a separate bowl mix together flour, baking powder, cardamom, and salt. Slowly add flour mixture to creamed butter and sugar mixture. Continue to mix until dough has formed.

Scoop dough out onto a Silpat (or parchment paper) covered baking sheet and form into a roughly 15×4 inch block. Pop tray into refrigerator as you make the ginger-sugar.

Using a mortar and pestle grind together 6 pieces of crystalized sugar and 1 scant TBSP sugar. Final consistency should be that of gritty, wet sand. Remove biscotti dough from fridge and rub ginger-sugar over the top of the dough (I didn’t use all of the ginger-sugar, but use as much or as little as you like).

Bake until a light golden color (approx. 25 minutes). Remove from oven and cool for 20 minutes.

Carefully remove log from baking sheet to cutting board. Using a long knife (serrated if you prefer – I use a butcher’s knife) slice log into 1/2 inch wide pieces.

Return pieces to baking sheets, and return to oven. Bake for additional 15-20 minutes.

Remove biscotti from oven, and place on a cooling rack, they will continue to “crisp” as they cool. Store in an airtight container. 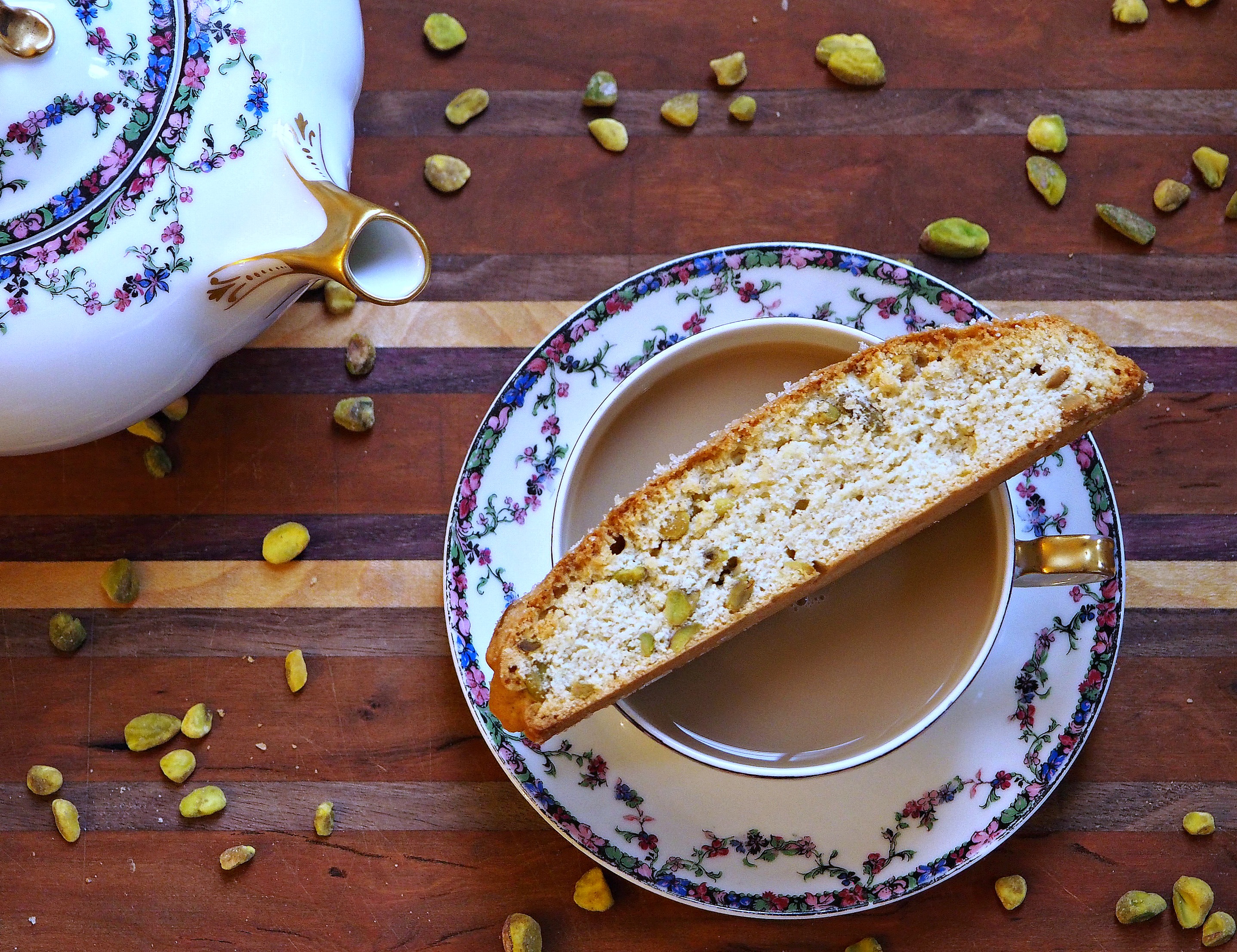