I am in New York on business this week, so I am reposting one of my favorite pieces ever, a bit of excellent advice from my pal, Robyn Carr, who will be receiving the Nora Roberts Lifetime Achievement Award from RWA this year–that’s how awesome she is!

So last week I was chatting with my writer pal, Robyn Carr. Yes, I totally just name-dropped there, but I did it for a reason. I wanted to pick Robyn’s brain about some writerly things, and I knew if I told you where I heard these marvelous things, you’d listen even harder. Robyn is one of my very favorite people in this business; hell, she’s one of my favorite people PERIOD. She’s honest, kind, loyal, and talented, and she has 35 years in the publishing business. She’s been down and she’s been up, and right now, she’s VERY up, since her latest book just hit #1 on the NYT list! (That would be THE WANDERER, the start of her brand spanking new series. Haven’t gotten it yet? Go. I’ll wait.)

Anyway, this isn’t even Robyn’s first #1, so when I had a little noodling to do last week, I knew she was the perfect person to ask. I had dropped her a congratulatory email on her firstie, and later that day I sent her another, telling her I would love to chat in a few days when she had some free time and was done drinking champagne and dancing on tabletops. My phone rang within ten minutes because that’s just the type of person she is. I told her that I was pondering some options about a couple of different projects I had in the works, and needed to get some clarity. I knew by talking to her, I’d start making sense of the cloudy soup in my head. 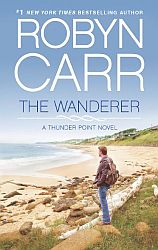 In typical Robyn fashion, she managed to be brilliant over the course of the next hour. And after we got off the phone, I felt MILES better. So much better that I jotted down the main points of what she’d said because I knew someone else would find them helpful too. And because Robyn is awesome, when I asked for permission to blog about what she’d said, her response was, “Go for it, babe.” So, here is some straight up wisdom, Carr-style. Her points are in bold, my commentary follows.

And that brings me to something Robyn didn’t say, but sounds like her. It’s a line from “The Best Exotic Marigold Hotel”, and it’s become something of a mantra for me. “Everything will be alright in the end. And if it is not alright, it is not yet the end.”